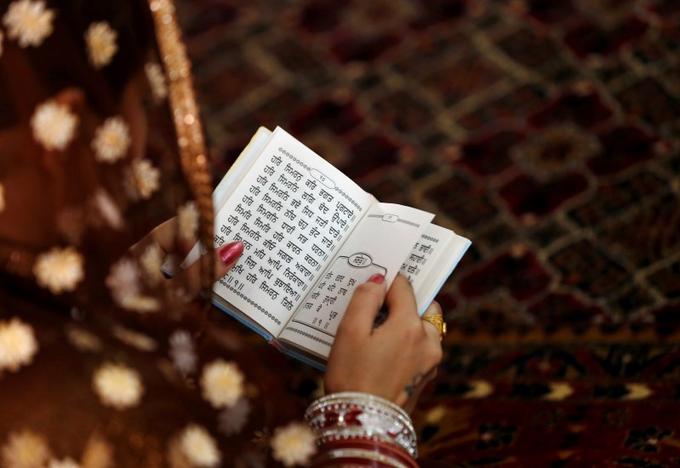 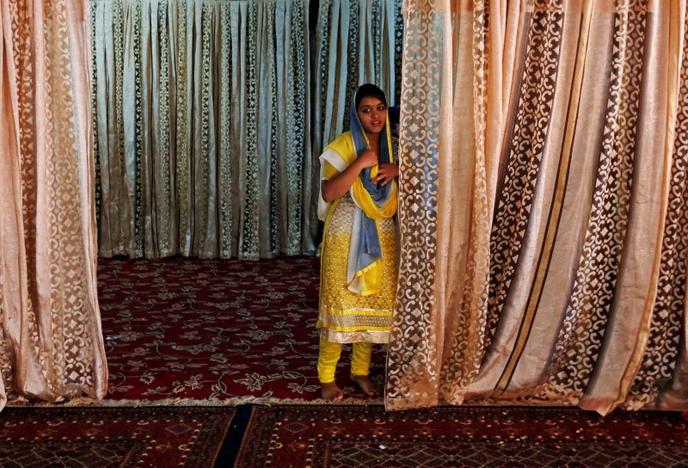 left
right
An Afghan Hindu woman arrives for a religious ceremony inside a Gurudwara, or a Sikh temple, in Kabul, Afghanistan June 8, 2016. REUTERS/Mohammad Ismail
2/8 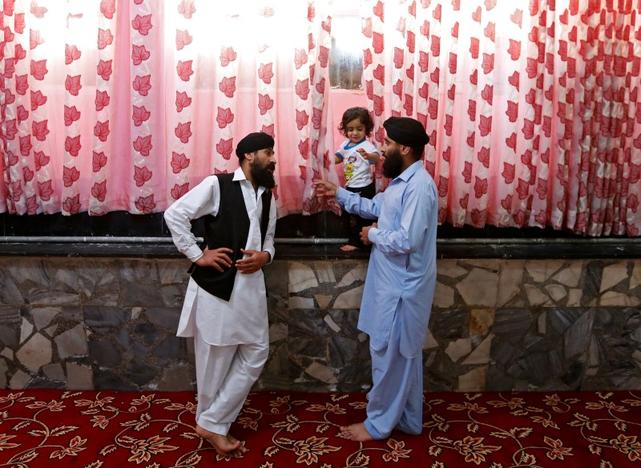 left
right
Afghan Sikh men talk to each other inside a Gurudwara, or a Sikh temple, during a religious ceremony in Kabul, Afghanistan June 8, 2016. REUTERS/Mohammad Ismail
3/8 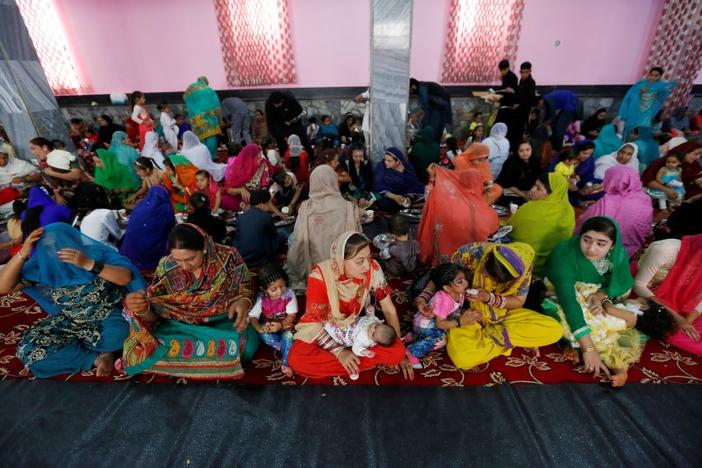 left
right
Afghan Hindu and Sikh families wait for lunch inside a Gurudwara, or a Sikh temple, during a religious ceremony in Kabul, Afghanistan June 8, 2016. REUTERS/Mohammad Ismail
4/8 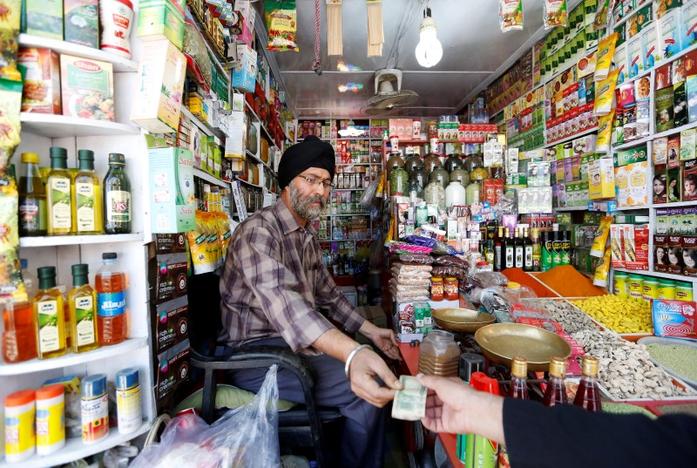 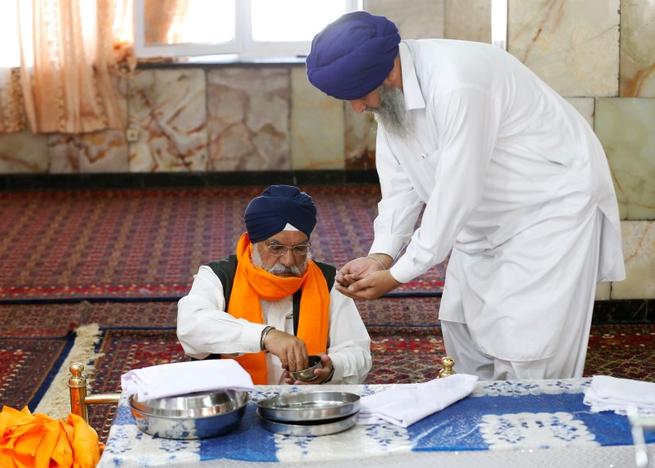 left
right
An Afghan Sikh (R) receives karah prasad, a sweet pudding offering given out to a congregation at the end of prayer, inside a Gurudwara, or a Sikh temple, during a religious ceremony in Kabul, Afghanistan June 8, 2016. REUTERS/Mohammad Ismail
6/8 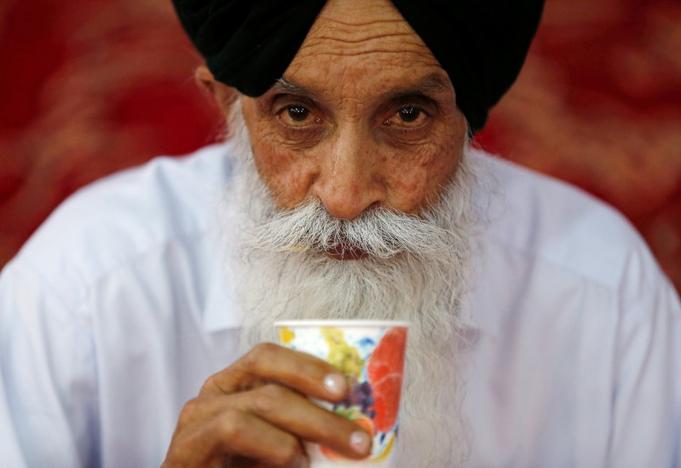 left
right
An Afghan Sikh man drinks from a cup inside a Gurudwara, or a Sikh temple, during a religious ceremony in Kabul, Afghanistan June 8, 2016. REUTERS/Mohammad Ismail
7/8

KABUL On a bright day in downtown Kabul, Jagtar Singh Laghmani was in his traditional herb shop when a man turned up, drew a knife and told him to convert to Islam or he would cut his throat. Only bystanders and other shopkeepers saved his life.

The incident earlier this month was the latest attack on a dwindling community of Sikhs and Hindus in Afghanistan, a deeply conservative Muslim country struggling with growing insecurity caused by an Islamist insurgency and economic challenges.

Once a thriving minority, only a handful of Sikh and Hindu families remain. Many have chosen to flee the country of their birth, blaming growing discrimination and intolerance.

"This is how we begin our day - with fear and isolation. If you are not a Muslim, you are not a human in their eyes," said Jagtar Singh, speaking in his tiny shop in the bustling centre of Kabul. "I don't know what to do or where to go."

For centuries, Hindu and Sikh communities played a prominent role in merchant trade and money lending in Afghanistan, although today they are known more for medicinal herb shops.

According to Avtar Singh, chairman of the national council of Hindus and Sikhs, the community now numbers fewer than 220 families, compared with around 220,000 members before the collapse of the Kabul government in 1992.

Once spread across the country, the community is now mainly concentrated in the eastern provinces of Nangarhar, Ghazni, and the capital Kabul.

Although Afghanistan is almost entirely Muslim, its constitution, drawn up after U.S.-led forces drove out the Taliban government in 2001, theoretically guarantees the right of minority religions to worship freely.

But as the conflict drags on, Avtar Singh said conditions were worse than under the Taliban, which imposed strict Islamic laws, staged public executions and banned girls from schools.

Hindus and Sikhs had to wear yellow patches that identified them in public, but were otherwise seldom bothered.

"The good old days have long gone when we were treated as Afghans, not as outsiders," Avtar Singh said from a temple in Kabul, all the while keeping an eye on visitors using monitors linked to security cameras.

"Our lands have been taken by powerful figures in the government, especially by the warlords. We are facing threats, and this small community is getting smaller and smaller every day," he added.

Last week, dozens of Hindu and Sikh families left Helmand, where Taliban insurgents, who have a presence in much of the southern province, sent a letter demanding 200,000 Afghani ($2,800) a month from the community.

Tensions have surfaced in Qalacha, an area on the outskirts of Kabul where the Sikh and Hindu community owns a high-walled crematorium.

As the capital has expanded in recent years, the neighbourhood has become densely populated and some newer residents oppose Hindu and Sikh cremations, a practice foreign to Muslims, who bury their dead.

"When they burn the body the smell makes our family sick and we don't want this to happen here," said Ahmad Timor, a Muslim resident in Qalacha.

The Sikhs say local Muslim hardliners have stirred up hostility against them, and the community now requires police protection for their funeral rituals.

"They throw stones and bricks at us, at the bodies of the dead, whenever there is a funeral," said Avtar Singh, pointing to a newly built house next to the crematorium.

Dahi-ul Haq Abid, deputy minister for Haj and religious affairs, said the government had done what it could to improve the livelihood of Hindus and Sikhs.

"We agree that conflicts pushed them out of the country, but their condition is not as bad as they claim," Abid added.

"We have allocated them a place to burn their bodies because inside the city people complained about the smell, but they did not agree," he told Reuters.

Jasmeet Singh, eight, stopped going to school because of what he said was daily harassment. He and other children from the community now either go to private schools or study inside the temple.

"While I was at school, other students were making fun of me. They were removing my turban, hitting me and calling me Hindu and kaffir (infidel)," said Jasmeet Singh, as other boys nodded their heads in agreement.

Increasing numbers of Sikhs and Hindus have moved to India, their spiritual homeland, but some say they remain foreigners wherever they go.

"When we go to India, we are known as Afghans, but when we are here, we are seen as outsiders even if we are native Afghan," said Baljit Singh, a shopkeeper in Kabul. "We are lost between both worlds."

The executive of a Pakistani company was charged in a U.S. federal court on Wednesday for his part in an alleged $140 million "fake-diploma mill" scheme, the latest step in a global crackdown touched off by arrests in Pakistan last year.

KATHMANDU Nepal's national unity is under attack and its people must act to save it, former King Gyanendra said on Wednesday, in some of his most critical political comments since being toppled by a parliamentary vote eight years ago.

Pakistani cleric-turned-politician Jhangvi says sectarianism in his past

JHANG, Pakistan Masroor Nawaz Jhangvi, a Muslim cleric whose father was one of Pakistan's most infamous sectarian figures, said he has become more moderate and distanced himself from his previous anti-Shia rhetoric after winning a regional assembly seat.